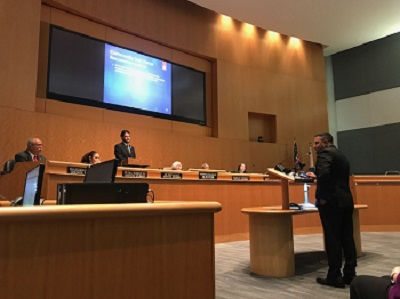 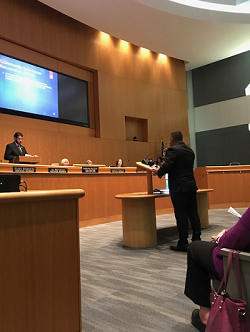 Mr. Ortiz wrote a very heartfelt and informative email to all of his staff after he presented at the Hayward City Council meeting on June 6, 207. It is as follows:

It is with great pleasure that I announce that Hayward officially has passed a resolution to become a “Sanctuary City” on June 6, 2017.  Tuesday night the City Council voted on a resolution titled:  Adoption of a Resolution Declaring the City of Hayward a Sanctuary City and Amendment of Administrative Rule 1.10.

I’m proud to say that the vote was passed unanimously 7-0 in favor of the resolution by the Hayward City Council.  I would like to thank everyone who spoke in support of this resolution.

This was truly a collective effort by many community members!  I would like to acknowledge Hayward City Council, specifically Council-member Elisa Marquez and Council-member Francisco Zermeño  for their support in being part of a committee to move this item forward before the City Council.  Also, I would like to thank The “Hayward Collective” Hella Diverse, a grassroots entity that helped push this item forward as well, community members, BOS Richard Valle, and La Familia staff (on their own merit).

In a time where we cannot depend on our national leaders, we now know that in Hayward we can depend on local community to stand on the right side of human rights, human dignity and equality, irrespective of immigration status.

La Familia as an organization built on the needs of under-served and marginalized populations continues to be profoundly committed to the well-being of children, adults and families in our communities irrespective of immigration status.  After all we are “La Familia”!

After sending this passionate email to all of his staff, he continued to encourage his staff to continue the hard work that they do for Hayward and throughout Alameda and Contra Costa Counties.

In the video below you will see a the passion that Mr. Ortiz has for his community and for the people who he sees as citizens who need help, even if his government doesn't.

La Famiila stands with all residents of Hayward, California, and the United States who are here to seek happier, healthier, safer lives. We believe in the dignity of and respect for all individuals in our communities and will continue to support and serve them through our services.